In 1979 I hitch-hiked for seven weeks around the United States.  What became of the carefree, relaxed young 21 year-old of these pages?  Can I reconnect with those qualities, forty years later?

What about America itself?  Was it better then, or worse?

Perhaps the US needs to reconnect, too.

You can read more episodes from this journey on my page, The Americans.

Here is how I set off from New York on my first day of travelling, on 3 July 1979.  Pictures below!

On Tuesday morning, Harold and Dorothy drove me from their house in Ardsley to the Major Deegan Expressway, heading south for Washington, D.C.  The road stretched out ahead.  First target was to reach the New Jersey Turnpike.

How was I not terrified?

Dorothy Berkowitz seeing me off on the Major Deegan Expressway

Aged 21, my primary emotion was excitement.

Looking back, I think: “how can I reclaim that boldness, that clarity of purpose, that focus on the present, that carefree calm?”

Things I was not worried about:

– my career.  It had not yet started.  I had nothing to screw up;

– money.  I had all my cash, for seven weeks in the US, in traveller’s cheques on my person;

– other people.  During my trip, I wrote several letters and postcards home.  I tried to make one phone call, reversing the charges because I had no coins, to Harold in Ardsley – I can’t remember why.  On the line, I heard him telling the operator he refused to accept it;

– information about the rest of the world.  The Internet did not exist.  I do not remember buying a newspaper.  I had a tiny transistor radio (thanks, Harold) but mostly listened to music;

– death, injury or other cataclysm.  Sure, hitch-hiking posed risks.  But what would life be like if it consisted mainly of avoiding risk?

Things I was worried about:

– how quickly will I catch a ride?

If living in the moment had been invented, I would have been doing it.

I had arrived at JFK the previous Wednesday. For six days, even the most laidback, doped-out, rock-lobotomised New Yorkers had told me hitch-hiking in the US was too dangerous to contemplate.  When I told them I planned a seven-week trip around the entire country, they predicted my rape, castration and sale for medical research before I’d crossed the mouth of New York Harbour.

It was a suicide mission, they said.  If I made it beyond New Jersey, it would be a miracle.

I tried to explain the intoxicating intimacy and knife-edge mutual trust of hitch-hiking.  I said Jack Kerouac’s Sal Paradise was inspiring.  ‘Jack Kerouac is dead,’ they said.  ‘He was a sad, sexist creep.’

Maybe they were right.

But I set off anyhow.

Looking back at my Rand McNally Interstate Road Atlas I am astonished not only by my courage, or calm, in setting off on an odyssey around the four corners of the USA despite the blood-curdling warnings.  I am amazed too to look at the map: a baffling spaghetti of expressways, parkways and freeways (“For New Jersey, see page 57”).

No Google Maps or GPS, my first time in the States.

My diary reads: I squinted into the sun for about 20 minutes (got to let the drivers see my honest eyes) before giving up and donning my ultra-dark smooth shades.  Within ten minutes, four cars stopped, all going to New York (ie not Washington direction).  The fourth, I took.

The fourth driver to stop was a swarthy, friendly guy in a limousine named Joseph L Belvedere, Attorney and Counsellor at Law in Brooklyn.  He gave me a business card.  ‘In case you ever get into any trouble,’ he said.  Would I like to come and see his office?  He could drop me afterwards on the Verrazano Narrows Bridge, he said, well-placed for I-95, the New Jersey Turnpike.

We drove downtown.  He parked the car and we entered a tall office building.  I felt no alarm at anything untoward; only a nagging concern that I needed to get more miles under my belt and I was not yet out of New York City.

He showed me his office, panelled in dark wood, with a view over the city and a secretary outside who seemed unsurprised to see her boss appear with a total stranger toting a rucksack.  I felt as if I were in a film set.

‘I picked up a hitch-hiker on the Major Deegan,’ Joseph said.  ‘He’s heading to D.C.’

‘Won’t you stay for lunch?’ the secretary said.  ‘You have a wonderful accent.’

‘It’s a beautiful office,’ I said.  I was enjoying the air conditioning.  ‘But I have to get going.’

I waited forty-five minutes for a ride which only took me across the Verrazano Narrows Bridge, then ten minutes for someone else who dropped me at the beginning of the New Jersey Turnpike.  My excitement ebbed.  Time passed. Anxiety grew.  Was hitch-hiking around the country an impossible dream?

Then magic began.  Johnson Fortenbaugh, Jr stopped in his Ford Pinto, a compact car which made so much more economic sense than most of the two-ton lead-sleds which populated America’s roads that it went out of production almost immediately.

He was heading for Oxford, Maryland, more than two hundred miles away.

Johnson Fortenbaugh, Jr seemed a liberal fellow.  The accident at the Three Mile Island nuclear plant in Pennsylvania had happened four months earlier, leaking radioactive gases and iodine into the air of Dauphin County.  Ironically, the accident took place twelve days after the theatrical release of the film The China Syndrome, featuring Jane Fonda, Jack Lemmon and Michael Douglas, about a nuclear accident at a fictional power plant.  The title came from the description of a nuclear meltdown which could cause a reactor to melt through its containment structures and sink into the earth “all the way to China”.

Subsequent investigations revealed a catalogue of errors in the operation of the plant.

I often wonder if the power station in which Homer Simpson “works” as a nuclear safety engineer was based on Three Mile Island.

By the time I arrived that summer, the anti-nuclear lobby in the US was glowing hot. Johnson Fortenbaugh told me he was worried about the risks of nuclear power, and concerned that President Jimmy Carter was not governing the country as well as he had hoped.

He also worried about the oil crisis.  The revolution in Iran had slashed that country’s oil output and world energy prices had soared, leading to panic buying in the US. New Jersey was one of several states which had implemented odd-even gas rationing, where only people with odd-numbered licence plates could buy gas on an odd-numbered day, and vice-versa.  This always seemed to me unfair on even-numbered plates, which got fewer days.

The Pinto had an even-numbered plate.

We ran out of gas on the New Jersey Turnpike.

Johnson Fortenbaugh, Junior, out of gas on the New Jersey Turnpike

Was it true, as people said, that America had lost its pizazz under Carter? Later that month Carter would give a speech, to which I listened in Los Alamos, New Mexico, in which he called on citizens to reduce energy use and improve energy efficiency.

Carter was later criticised for wearing a cardigan when he made what was dubbed the “malaise” speech.

Was this fake news?

You can watch the speech on Youtube.  He is definitely wearing a suit.

‘I want to talk to you right now,’ Carter says, ‘about a fundamental threat to American democracy… That threat is… a crisis of confidence… We can see this crisis in the growing doubt about the meaning of our own lives.  And in the loss of our unity of purpose for our nation. The erosion of our confidence in our future is threatening to destroy the social and the political fabric of America.’

A 2011 CBS commentary says ‘it has come to be known as perhaps the most politically tone-deaf speech in modern American history’.

Johnson Fortenbaugh had been driving on empty for miles, unable to buy fuel, so it was no surprise when the car slowed and stopped.

‘You OK for me to stay?’  Was he really going to leave someone he had met a couple of hours earlier in charge of his Pinto?

‘Sure.’  He rummaged in the bulbous interior for a jerry can.  ‘I’ll hitch up the road.’

I waited with the car.  I have no recollection of being hot, waiting under a cloudless sky by the asphalt.  Nor was I impatient.  I was humming the New Jersey Turnpike Song, Chuck Berry’s You Can’t Catch Me, and watching the cars whizz by.  I was on the move, on the road, in America, heading south.

Johnson Fortenbaugh came back in a tow-truck with some gas, and we were soon rolling south, leaving the freeway and passing through lush fields of tobacco, corn and soybeans.  We stopped at a gas station for ice creams, which he paid for to thank me for looking after the car.  He invited me to come and have dinner, and spend the night, at his house in Oxford, Maryland with his wife and children.

This was a fantastic offer.  Oxford (there is a Cambridge a few miles away) lies in a deeply indented coastline on the Lower Choptank River Sanctuary, rich with boats, water and pleasure pursuits of every kind.

In one day, I had been offered both lunch and dinner and had accepted an ice cream.  I did not yet know it, but I would not pay a night’s accommodation for another four weeks. Are Americans still as generous as this?

Back in 1979, I found them filled with kindness, quirkiness and originality, creating a brew of mindboggling unpredictability.

Is that still true?

Few people I met in those days were angry or fearful, although many were suspicious of government and the political establishment.  They seemed self-confident, phlegmatic, sure of their ability to cope with whatever might come.

Johnson Fortenbaugh was maybe the first American who drove me far enough that year for me to feel I knew him a little.  When he dropped me at the turning for the Chesapeake Bay Bridge, I felt a pang of loss.

My first long day of travelling had not shaken my carefree calm. On the contrary.  Everything seemed possible.  America lay before me, waiting, in the pages of my Rand McNally Road Atlas.

Minutes later, a guy in a pick-up stopped, and drove me all the way to the heart of Washington. 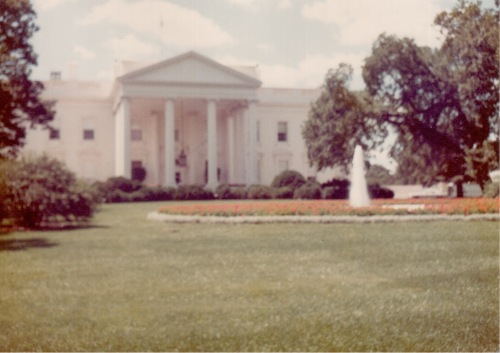 The squirrel is the smudge on the left near the flowerbed.  Can you still get this close to the White House?

He did not run out of gas, but his vehicle did break down, directly opposite the White House.  Cars were less reliable in those days.  I took my red rucksack from the back of the truck and took a picture of the White House, where a squirrel was sitting on the lawn, with my Olympus Trip camera.

It was twenty minutes’ walk to where Chris and John Purinton lived, in the Watergate Apartments.

P.S.  If you enjoy fresh, original writing, feel free to friend me on Facebook or sign up for e-mail updates (top right – see blue “click here” button).  You can explore the more than 200 blogs on this site via my five pleasure paths.  Have a browse.

P.P.S. Since writing this piece, and calling it “Leaving New York”, I have been humming Sheryl Crowe’s Leaving Las Vegas ceaselessly.  The power of popular song comes up frequently in The Americans.

P.P.P.S. You may also enjoy my piece The Russians: Vladivostok.

By Robert Pimm in Biography on 01/09/2018.
← Blood Summit: top reading group questions The Americans: Avenue of the Heroes →