Home » Reviews » “How to be an Alien”: George Mikes makes fun of the English

“How to be an Alien”: George Mikes makes fun of the English

George Mikes’ “How to be an Alien” is one of the funniest books in the English language.  It’s not about aliens, of course.  It is about the English.  Its real title should be: “why the English are absurd and hilarious – but I kind of like them”.

If you have not read How to be an Alien by George Mikes, please go and buy a copy instantly.  You will not regret it. 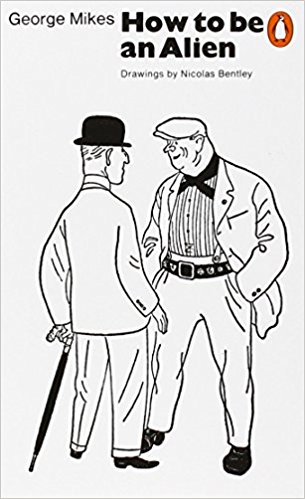 George Mikes was a Hungarian who came to England in 1938 (as he said: When people say England, they sometimes mean Great Britain, sometimes the United Kingdom, sometimes the British Isles – but never England).  He wrote dozens of books but is remembered mainly for his seminal 1946 How to be an Alien.  He described the genesis of the book thus:

Some years ago I spent a lot of time with a young lady who was very proud and conscious of being English.  Once she asked me – to my great surprise – whether I would marry her.  ‘No,’ I replied, ‘I will not.  My mother would never agree to my marrying a foreigner.’  She looked at me a little surprised and irritated, and retorted: ‘I, a foreigner?  What a silly thing to say.  I am English.  You are the foreigner.  And your mother, too…’  I saw that this theory was as irrefutable as it was simple.  I was startled and upset.  Mainly because of my mother whom I loved and respected.  Now, I suddenly learned what she really was.’

Mikes often said that he regretted the success of How to be an Alien.  In his preface to the 24th impression, he wrote: When the Rumanian Radio was serialising (without my permission) How to be an Alien as an anti-British tract, the Central Office of Information rang me up here in London and asked me to allow the book to be translated into Polish for the benefit of those many Polish refugees who were then settling in this country.  ‘We want our friends to see us in this light,’ the man said on the telephone.  This was hard to bear for my militant and defiant spirit.  ‘But it’s not such a favourable light,’ I protested feebly.  ‘It’s a very human light and that is the most favourable,’ retired the official.  I was crushed.

A few weeks later my drooping spirit was revived when I heard of a suburban bank manager whose wife had brought this book home to him remarking that she had found it fairly amusing.  The gentleman in question sat down in front of his open fire, put his feet up and read the book right through with a continually darkening face.  When he had finished, he stood up and said: ‘Downright impertinence.’  And threw the book into the fire.

He was a noble and patriotic spirit and he did me a great deal of good.  I wished there had been more like him in England.  But I could never find another.

How to be an Alien is so exquisite one could quote the entire book (see para 1).  But let us try to focus on a manageable number of quotations.

On understatement: The English have no  soul; they have the understatement instead.  If a continental youth wants to declare his love to a girl, he kneels down, tells her that she is the sweetest, the most charming and ravishing person in the world, that  she has  something in  her, something peculiar and  individual which  only a few hundred thousand other  women have  and that he would  be unable  to live one more  minute without her.  Often, to give a  little more emphasis  to the statement, he shoots himself on the spot. This is a normal, week-day  declaration of  love   in the  more   temperamental  continental countries.  In England the  boy pats his  adored one  on the back and says softly: I don’t object to you, you  know.’  If  he is quite mad with passion, he may add: ‘I rather fancy  you, in fact.’  If he wants to marry a girl, he says: I say… would you?…’  If he wants to make an indecent proposal: ‘I say… what about…’

The How to be an Alien chapter on sex reads in its entirety: Continental people have sex lives; the English have hot-water bottles.

On jingoism: On the Continent almost every nation whether little or great has openly declared at one time or another that it is superior to all other nations; the English fight heroic wars to combat these dangerous ideas without ever mentioning which is really the most superior race in the world.

On sport: Many continentals think life is a game; the English think cricket is a game.

On titles: Do not call foreign lawyers, teachers, dentists, commercial travellers and estate agents ‘Doctor’.  Everybody knows that the little word ‘doctor’ only means that they are Central Europeans.  This is painful enough in itself, you do not need to remind people of it all the time.

On weather: You must never contradict anybody when discussing the weather.  Should it hail and snow, should hurricanes uproot the trees from the sides of the road, and should someone remark to you: ‘Nice day, isn’t it?’ – answer without hesitation: ‘Isn’t it lovely?’

On English: The easiest way to give the impression of having a good accent or no foreign accent at all is to hold an unlit pipe in your mouth, to mutter between your teeth and finish all your sentences with the question ‘Isn’t it?’  People will not understand much, but they are accustomed to that and they will get a most excellent impression.

On cleverness: ‘You foreigners are so clever,’ said a lady to me some years ago.  First thinking of the great amount of foreign idiots and half-wits I had had the honour of meeting, I considered this remark exaggerated but complimentary.  Since then I have learn that it was far from it.  These few words expressed the lady’s contempt and slight disgust for foreigners…  In England it is bad manners to be clever, to assert something confidently.  It may be your personal view that two and two make four, but you must not state it in a self-assured way, because this is a democratic country and others may be of a different opinion.

On rudeness: In England rudeness has quite a different technique.  If somebody tells you an obviously untrue story, on the Continent you would remark ‘You are a liar, Sir, and a rather dirty one at that.’  In England you just say ‘Oh, is that so?’  Or ‘That’s rather an unusual story, isn’t it?’

On queueing: An Englishman, even if he is alone, forms an orderly queue of one.

On citizenship: The verb to naturalise clearly proves what the British think of you.  Before you are admitted to British citizenship you are not even considered a natural human being.

On languages: The knowledge of foreign languages is very un-English.  A little French is permissible, but only with an atrocious accent.

And, finally, on learning (from How to be Inimitable): One thing you must learn in England is that you must never really learn anything.  You may hold opinions – as long as you are not too dogmatic about them – but it is just bad form to know something.  You may think that two and two make four; you may ‘rather suspect it’; but you must not go further than that.  Yes and no are about the two rudest words in the language.

For: many of Mikes’s observations are as fresh and laugh-out-loud funny today as when he wrote them in 1946.

Against: not surprisingly, a few sections have aged less well.  But on balance the book is still so brilliant it has to get 10/10.

P.S. If you enjoy fresh, original writing, you can friend me on Facebook or sign up for e-mail updates (top right – see the “click here” blue button).  Check out the range of writing on this site via the sitemap and guide.  Or try my books Blood Summit or Seven Hotel Stories.