I have so far published seven hotel stories, available on Amazon in the novel-length Seven Hotel Stories: The Complete Collection.

All the stories feature the world’s most brilliant, unpredictable and occasionally homicidal hotel manager, Ms N; her beautiful but naive ally, Tatiana; and Ms N’s unique methods of solving problems.

The first story, Britches, shows how Ms N and Tatiana first met; and how they sorted out the hotel owner from hell using a Combined Burns Night and St Patrick’s Day Ball (they exist – I have been to one); the President of China; and something Tatiana found under a handsome Scotsman’s kilt.  You can read an excerpt from Britches here. 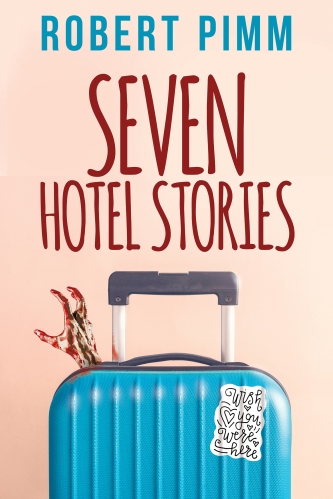 The second Hotel Story is The Two Rooms.  It features an obnoxious guest; a hypocritical Prime Minister on a moral crusade; some Russian ice-hockey fans; an angry Japanese sushi chef; and a startling twist.  Is it my favourite?  Perhaps it is.  You can read an excerpt from The Two Rooms on this site.

In the third story, The Swedish Woman, a man is found dead in a hotel elevator awash with blood.  But who has killed him?  The suspects are many, including the enigmatic Swedish woman, whose identity is a closely guarded secret.  You can read an excerpt from The Swedish Woman here.

The fourth Hotel Story, set somewhere in the Former Soviet Union in a hotel with ugly problems including bribery, corruption and a guest with unpleasant proclivities, is The White Blouse.  It has a couple of scenes which are not for the squeamish.  An excerpt is here.

The fifth story, Gents, is set in Florida and involves a congress of hoteliers; alligators; and an ambitious colleague who does not respect Ms N.  Tip: not respecting Ms N is always a bad idea.  The opening of Gents is here.

The sixth story, Ask for Scarlett, takes Ms N and Tatiana to the Caravanserai Ultra Platinum – “the coolest and most ecological as well as the most luxurious hotel on earth”.  Find out why Tatiana says that “every paradise contains a serpent”.  You can read an excerpt on this site.

The seventh story is The Three Heads.  Why are hotel review sites saying that Tatiana’s luxurious but loss-making hotel, the Caravanserai Ultra-Platinum, is flea-infested and plagued by theft?  Can social media phenomenon DaGurl help save the day? Excerpt here.

You can find the complete volume of Seven Hotel Stories on Amazon.com, Amazon.co.uk, Amazon.de and other reputable Amazon outlets.  Of if you prefer you can buy individual stories, although they are not such good value as the complete set.

P.S. If you enjoy fresh, original writing, feel free to friend me on Facebook or sign up for e-mail updates (top right – see the “click here” blue button).  Check out the range of writing on this site via the sitemap and guide.