Tuesday – so here is the next droplet of my dystopic sci-fi novel Biotime.  If you’ve missed the rest, check out the story so far.

Jake has thrown down the gauntlet to whoever destroyed the Hughes Procreation Center.  He showed his face to the media and promised to come after them.  Now, he knows they’re after him.  He changes ID, then flees from Santa Monica to New York City by long-distance autocab. In these days where every second you’re alive is beyond price, no life insurance company allows its clients to fly.  Only the One Lifers indulge in intense and dangerous habits… 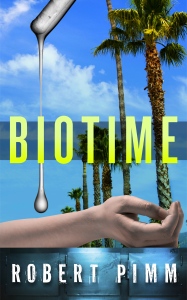 Jake awoke outside Tucumcari to find his body dank with sweat and the arid scrub alongside the Interstate bathed in moonlight. It was 3.43 a.m. Long-distance autocabs were so safe they were permitted to travel at up to 60 miles an hour. But with refuelling stops, the trip would still take two days. Desperately slow; but like the slogan said, You’d Have to be Mad to Fly. Most life insurance companies would not allow it if you had significant life expectancy.

He’d been dreaming again. His parents’ dead bodies on a viewing platform, rotten and decayed.   In the visitors’ chairs, the corpses of Ed and Abigail. Only the security guards were the same, their leather uniforms gleaming, Big Frights ready. Jake pulled himself up in the seat and rubbed his eyes. The cab’s rear window showed empty highway. The destination panel still displayed New York City. He checked his bracelet. Who was he now?

Suzy Stew in the Identity Laundering Division had clucked her tongue when Jake called her from Santa Monica twenty-four hours earlier. ‘You know how much fake IDs cost?’ she’d said. ‘You already had Michael Novak. Why not use your bracelet to clone someone nearby?’

‘I just did that six times in six minutes.’ Jake had been calling from the Santa Monica sea-front, hunched next to an ice-cream kiosk, scanning the walkway for anyone following. ‘I even switched off my ID a couple of times. But without an ID I can’t enter a building, or rent a cab. And each time I copy someone, that makes two the same. The FUCC will pick it up right away.’

‘Easy, kiddo. You’re hyperventilating.’ Suzy treated all Informals like errant children, even though it was possible they could have been born before her. ‘Data from the Federal Unitary Control Computer are only available to authorised enforcement officers, on provision of a warrant. No-one will find you.’

‘Like no-one could find the ten guys murdered this morning? Someone has access to the FUCC. All they have to do is track down any duplicate IDs and kill them both.’ He had taken a deep breath and lowered his voice. ‘Listen, Suzy, I need another unique identity if I’m going to stay alive more than ten minutes. And no-one else is left to use fake IDs except me and this new rookie agent. How about I make love to you? Twice. Three times. Whatever it takes.’

‘Why, Jake, that’s a wonderful offer. Call me when you’re a little older, darling.’ Her chuckle was warm. ‘What kind of ID do you want?’

An hour later, Jake had left Los Angeles as Dr Andrew Brown, a venture capitalist from Morro Bay keen to assess the viability of expanding independent Biotime production on the West Coast. It was a robust identity designed to give him a valid reason to call on Cleo Czernin, the Central Authority’s chief Biotime economist in New York City. A credible cover story, considering no-one ever thought to think twice. The Federal Unitary Control Computer featured a full biography for Dr Brown.

‘I shouldn’t say this, since we can only use him once,’ Suzy Stew had said, ‘but don’t stay Andrew Brown for long. Keep switching. Use data-shielding. You have chosen a perilous profession, kiddo. Good luck.’

Jake looked out at the ancient metal barrier along the side of the freeway. It looked solid, as if designed to protect something. But what? Somewhere out there, Rose was asleep in her One Lifer encampment. The One Life Trust had been right about some big waves coming in. But they surely could not have anticipated an atrocity like Hughes. Rose had been right about not contacting her, too, except in person. To holo her now could be to condemn her to death. Jake shook his head. What else had his sister been right about?

He tried to relax. If the Hughes Procreation Center had been destroyed to boost Biotime prices, Cleo Czernin might have some idea who could benefit from that. She also worked inside the largest data-shielded structure in the United States, and one which offered tremendous possibilities for switching ID. Jake stared out into the night. The challenge would be to stay alive long enough to get there.

I hope you’ve enjoyed this excerpt from my novel “Biotime”.   If you’re interested in hearing about further episodes, follow this blog by e-mail (top right, “click here”); or follow me on Twitter @RobertPimm (left hand side).  I can promise you a fun ride.

If you’d like to read some complete fiction by me, see what you think of my “wonderful, feminist and dark” Hotel Stories.

By Robert Pimm in Fiction, Fiction: Biotime, Fiction: Novels on 12/05/2015.
← South-East Anatolia: 23 photos of places you wish you could visit Biotime 37: “He took a final look at the child, and pushed the drawer closed” →